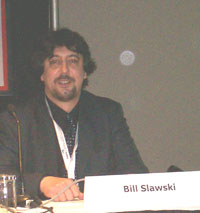 Bill Slawski was a legend in the search engine marketing industry. When he died suddenly on May 17, 2022, the shock waves were felt everywhere.

The Master Explainer of Google patents, Bill worked up to his position as Director of SEO Research at Go Fish Digital by being the most brilliant mind in the industry.

When he died, industry insiders knew immediately that I would be devastated. It has taken me a long time to find a peaceful place in myself settled enough to tell you about his earliest days when he was just entering the field of web site marketing.

The Guy Who Appeared and Stayed To Help

I met Bill online in 1998 when I joined a club for small businesses run by a woman named Carol Daly. I helped her members when someone had questions about web design or website promotion.

In those days, it wasn’t called SEO yet.

I had a club too, called the Cre8pc Website Promotion Club. Bill joined it. We were a tiny band of people fascinated with the idea that websites could be businesses.

Search engines and directories carried promises of fame and fortune to anyone who could figure out how to wrestle them.  Bill had a knack for explaining and I had a knack for asking questions.

The two clubs grew and mine attracted Ammon Johns, Jill Whalen, and a host of people I didn’t know but who would become famous someday.

It was several years before I had the nerve to share anything personal about my life with Bill. I owned a club, websites, and then launched a larger forum for web designers and marketers, but the truth was that I was struggling.

It took me a long time to admit to Bill through email, that I was unemployed, a mom with two young children, facing eviction and broke.

He listened. He didn’t judge me. His way of providing support was to help me keep the club active and become the co-admin when it became Cre8asiteforums.

And then we figured out that we lived not too far from each other. He was in Delaware, and I was in Pennsylvania, both of us close to Philadelphia and New Jersey beaches.

As we got to know each other, we figured out that we both used to go to City Gardens in New Jersey to listen to punk bands and were there at the same time.

The first time I met Bill in person was at one of Jill Whalen’s High Rankings seminars.

By then the SEO industry had exploded and there were many communities where people could join, learn, and argue with each other.

Bill (aka Braggadocio) became my co-admin for Cre8asiteforums, and we added Ammon Johns (aka Black Knight) and Jill Whalen when we took the community out into the world in 2001 with newer software and more community bells and whistles. Jill later went on to run her own SEO forums.

Ammon and I had known each other since around 1995.  He was one of my strongest supporters and he liked Bill. I was nervous but trusted their guidance.

Years into running Cre8asiteforums together and building our individual careers, Bill and I would sometimes be at the same search engine marketing conferences as speakers or bloggers.

At an SES in San Jose, I had met someone on the plane who was attending that conference and he rented a car so that the 3 of us could drive up to the Googleplex. We were like fans going to a rock concert.

Danny Sullivan launched Sphinn and it was there I would meet a woman who hated me so much that she decided to try and destroy my career.

She was engaged to Bill.

This was the dark time.

His fiancé demanded that he not have any women friends.  She wrote horrific claims about me and my friendship with Bill that were not true. I and others were stalked by her.

When the death threats came, my husband and I met with my parents  and shared all the documents I had gathered to protect myself and kids.

There was a surprise birthday party for me when I turned 50 in King of Prussia in Pennsylvania. Bill wanted to sneak up from Virginia where he was living with his fiancé to be there and asked me to be sure nobody took his picture if he came because he would get into trouble with his fiancé. I promised.

However, another woman who strongly disliked Bill was there and refused to honor his request. She took photos of him and posted them online.

When his fiancé managed to get Bill’s administrative access to Cre8asiteforums, I banned him because she was out of control, and he was unable or unwilling to stop her.

My decision tore me to shreds.

We wouldn’t talk for 10 years.

My days in the SEO industry were ending as my interests and skills were in UX and Accessibility and how they intersected with search behavior and neuroscience.

Bill had moved to California and got a job out there. He seemed content. I don’t know what happened to his engagement and I never asked. A world of career growth and life had happened in 10 years.

I had heard Bill was going to Pubcon and I was unsure what to expect if I happened to see him.

He walked into the bar and sat next to me on a bar stool and somehow we started to talk about our work.  Like old times, we dissected theories and pounded out the ideas we had in our heads. Our fascination for the intersection points for web design, search and people was still on fire and we simply picked back up as if those missing 10 years didn’t happen.

I never asked about her. He never mentioned her.

It was my last conference.

Bill and Ammon had launched Bill and Ammons Bogus Hangout. Some old friends would drop by there and I had an open invitation to join in whenever I could.

Bill always made me feel welcome there. I could ask any questions and not feel dumb.

That was the foundation for Cre8asiteforums.  We believed that no question was too dumb, and everyone was welcome.

Bill Slawski was a gentle soul with a mind that could unravel the mysteries of search engines.  His contributions to the industry are unmatched.

He loved the sea.

He loved nature and cared deeply about the environment.

He was humble and sought no fame.

He was a quiet legend whose work supported anyone who wished to learn.

I believe he found his greatest joy in teaching.

The Early Days with Bill Slawski